The native nucleus of the town developed around the public wells and to the parish church that, with years have constituted the aggregation poles of the different neighborhoods. Esempio, despite the varied rehashes operated in the years, still maintains in the old urban center, over certain aspects of medioeval typology disposed like the spokes of a wheel, the planimetry of clear Arabic derivation with his alleys and narrow accesses. This style have been imported from the Spaniards and has gone to superimpose to the preceding structure of the court of Roman tradition, modified with the " lollas" built in " ladiri" (mud madebricks). Besides also the hereditary division among relatives has contributed to the varied " adjustments " that have given origin to new alleys. 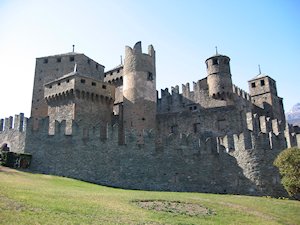 In the urbanistic context of the historical center we can find one of the most important structures of the town, the House Carcassona, best known as the Roberti's Castle.

A portal with coat of arms of family camps, and gives the access to an ample courtyard in which at the end the construction rises. It's constituted by a central body (the house residence), with two floors and from two side bodies with a floor and slightly lower, placed side by side from two embattled towers with a square plant.

In the XVIII sec. Efisio Luigi Carcassona, of algherese origin, had as a feud the villa of Esempio and the title of “Marquis of St. Saverio”. His daughter Giovanna married Don. Tomaso Nin. Their daughter Luisa married the count Edmondo Roberti of Castelvero (Piedmontese noble, impassioned archaeologist), for which the House of Esempio is also known as Roberti's Castle.

The last marquis sold the House to three Italian mainland farmers: Vandoni, Muzzioli and Restano from which, after 18 years of lease, Francis Angius acquired, father of the actual owners.

(*) “Villas and Buildings of the Nobility in Sardinia”–Sergio Serra. .

The historical center of the city is still constituted both from elementary residences and from more complex buildings. The traditional house, is built generally without foundations, on a layer of hard clay with a not worked skirting cemented with minute stones and mud, the material of the construction used for the masonry is the mud that mixed to the straw forms raw bricks called " ladiri ". The coverage is constituted by a roof with two droopings that lean on two walls, on a beam of height and on the wood trusses of juniper and is sustained by a fence of reeds that forms the base on which lean the tiles walled with mud and mortar. The rooms of the house are conceived beside the the domestic demands for the working activities also. The outside of the whole construction is embellished with the portal that constitutes the only access to the residence. The portal, is composed by the skirting of base, on witch the structure leans, surmounted by a frame, is joined to the arc , whose central part is put in evidence the vault that generally brings the date of construction or the initials of the name of the owner; often the side sandstone blocks are graven with geometric and floral motives to imitatate the friezes of the Catalan teachers. Generally in correspondence of the portal, inside the court we find a covered space, turned in winter to the custody of the oxen's wagon. The real front door is wood made composed by two shutters; to the right it opens the entry door, whose outline is also reproduced on the left part. The central part often has some friezes in wood that stylize the rays of the sun or small amphoras with floral motives. Every front door has a leaf of worked iron riproducing the head of a lion or some other animal, while the pole represents a hand that grasps an iron ball. By passing time, some of these houses suffered some changes and, in the first years of the eighth century , it developed also the typology " palazzu " with a wide structure extended orizzontally, that gives a more urban aspect to the residences. 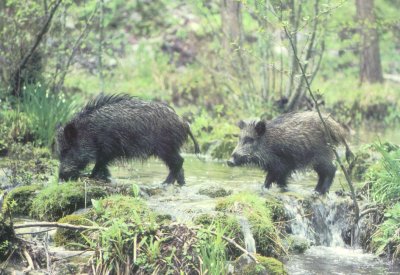 More like hills because nobody reaches the 600m of height.

The valley of “Isca Manna” is situated at 312 ms of height s.l. distant from Esempio around 10 Kms and crossed by the river “Flumineddu” in parts covered by oleanders, and from fresh fountains. It grow a lot of oaks, junipers, olive, myrtle, and birds can be sighted as the pigeons and the partridges and animals among which wild boars, foxes, hares and wild rabbits.

Mountain Acutzus
In the north of Esempio, toward Donori, we can find the Acutzus Mountain whose top reaches the 582m and is therefore the tallest mountain. It grows holm-oaks, stains of myrtle and strawberry-trees. Populated by wild boars, partridges, foxes, wild cats, hares and rabbits. Despite his name its top has not the shape of a point but it's rather round. Nieddu Mountain 503m tall, about 6km distant from the town.

In the territory of Esempio flow two rivers at torrential character: The “Rio Bonarba” that borns from the mountains of the Gerrei, and when it passes in the countries of Esempio takes the name of “Rio Flumini” while toward the mouth it changes name in “Rio Mannu”. it Flows in the gulf of Cagliari next to the pool of Santa Gilla.

The second river “Rio Bardella” changes name after the beginning of his course in “Rio Balardi”, that is a tributary of the Rio Mannu.