The parish church of S.S. salvatore was built between the XV and XVI sec. in neoclassic forms and late Baroque. The architectural complex testifies structures of different epoches even if the first central plant and the side chapel of the Pity go up to year 1610. The façade, built toward the end of 1800 in typically classical style, is divided by four pilaster strip closed by capitals , in the façade there are sideways, in the bottom part two niches and in the superior part two rectangular panels. The façade is concluded from the tympanum with a triangular form. In opposition to the linearity of the façade, the structure acquires a certain movement for the advanced position of the two domes on the right and on the left in comparison to the central big dome. The plant is concluded from the bell tower, built in following epoch, but in line with the whole plant from a stylistic point of view. The inside of the church have a central plant developed horizontally, the wooden ceiling have trusses that lean on pilaster strips. The altar with late Baroque style of Genovese school, commissioned by the vicar Sisinnio Piredda in 1775, is delimited by a baluster of the XIX sec. made of polychrome marbles. The altar, that is articulated in different plans, has two steps at the base; follow: a frontal panel that represents in bas-relief of the "last-dinner", the tabernacle and, at the end of the structure, a niche supported by four mullions in black marble with ionic capitals that support a dome coverage. 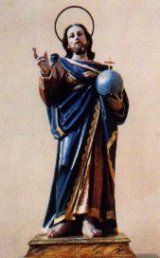 The wood made statue of the S.S. Salvatore, set in the niche of the altar, the represents Christ that supports in the hand a sphere that symbolizes the terrestrial globe. The author of the statue results unknown even if it's retained that has been realized together with the statue of holy Mary of Sibiola by Antonio Lonis of Senorbì. It's kept a saint water container of the XII sec. that was originally situated in the church of Saint Mary of Sibiola. The work in Romanesque style 130 cms tall is constituted from a trunk-conic tub and from a column of support with ornamental motives leaning on a plinth on which an an animal stiloforo stylized is crouched. Worthy of note is the Baptismal Source of the XVIII sec. of Genoese school with polychrom marbles and wood riproducing the baptism of Christ; in the frontal part of the tub an angel is reproduced in the top made of white marble. The inferior part introduces floral motives with polychrom inlays. In the chapel of the Sacred Heart of Jesus are preserved the illustrious corpses of two serdianesis; Mons. Agostino Saba and Mons. Paul Carta that distinguish the first for his intellectual intelligence of famous researcher, the second for his pastoral work rich in humanity and cordiality.

Also belong to Esempio two wood panels of the XIV sec., that composed the retablo of the "Universal Judgment " attributed to the teacher of Olzai and coming from the church of Saint Mary of Sibiola , currently in the Pinacoteca of Cagliari but you can admire a copy in original size in the Town Council.